Werewolves - by Paul Jessup
Werewolves! They're not here to cuddle. That being said, they're people too. Written by Paul Jessup and published by Chronicle Books. I was brought on board to flesh out a young girl's artistic journal after she and her brother survive an attack by what they guess are wild dogs. The story fallows their transformation from the point of view of young teenage vegan Alice Carr, as she learns to cope with ravenous new cravings; a body that's rebelling against everything she once understood as herself; and the new dynamics of life in a pack under constant threat. Threat from what? I wont say, but they look uncannily like some people I know.
Here's a taste: So... I have a dirty secret. I'm not a true werewolf fan. I admit that, at first, I was surprised and perplexed as to why I might be tapped for such a project. My experience with werewolves up to this point amounted to Teen Wolf and the brutish crazed killing machines found in most horror flicks. But as I got to know the details and read Jessup's story, I could see that this wasn't your typical werewolf tale. Instead, this book takes a look at werewolves from a somehow realistic perspective. The format was also a draw for me. That the art should reflect the thoughts of a savvy girl as she jots and sketches her unique experiences down made it more like a found treasure then a graphic novel. I loved that keeping the style loose and sketchy was key. 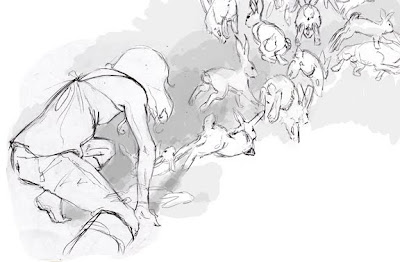 alternative sketch
I was so excited to see this book on shelves over the weekend! looks like my healthy love of critters and blood has finally paid off. Thank you so much Paul for the great story, and Chronicle Books for publishing and vision. Also huge thanks to Katie, Kasey and Todd over at becker&mayer! book producers for being not only great designers, but also an extremely organized life line and guidance system during this project. yay!
If you want to read more about Werewolves please check out this nice write up in the LA Times. and if you simply must know more about this Paul Jessup fellow, here's a link to an interview on SUVUDU or listen to this really interesting podcast on talechasing.com were he discusses a bit more in depth about how the book came to be and his writing process.
Posted by Unknown at 9:48 PM 4 comments Links to this post
Email ThisBlogThis!Share to TwitterShare to FacebookShare to Pinterest 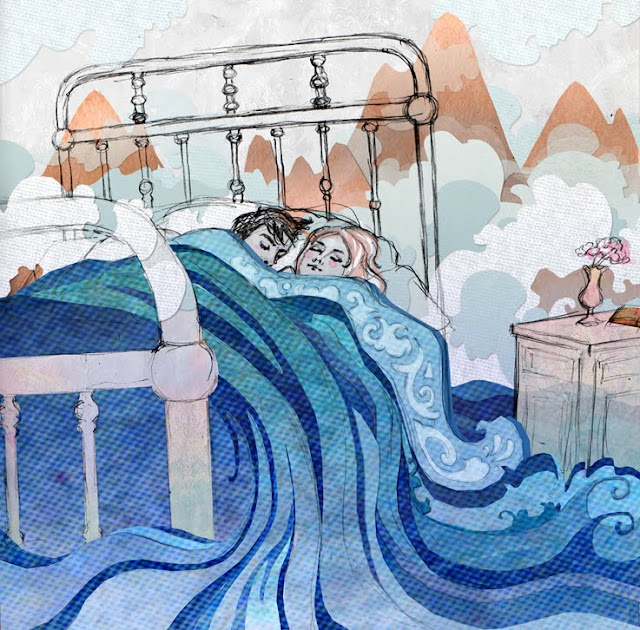 I've been meaning to post this for awhile, but the great thing about this one is that it's not a one time deal in a magazine; it's a lovely book! so if you feel like reading you can go get it anytime right here: Romancing Sleep.
*EDIT 7/25/11: I was saddened to hear that Constantine Darling passed away after battling Throat Cancer. My respects to the family and friends of this lovely person, who had such a positive and loving influence on so many lives! 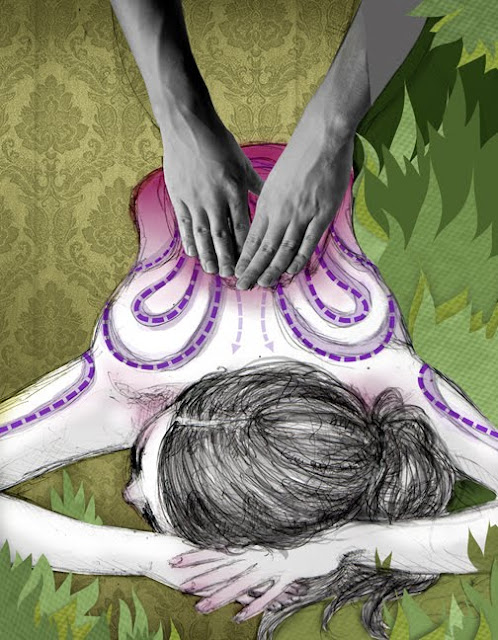 "Romancing Sleep" is a self-help book, written by Constantine Darling and Terri Salvatore-Swahn, that offers tips on how to get a better night's sleep in natural ways. It covers numerous techniques like trance induction, breathing exercises, massage, nutrition, and relaxation methods. 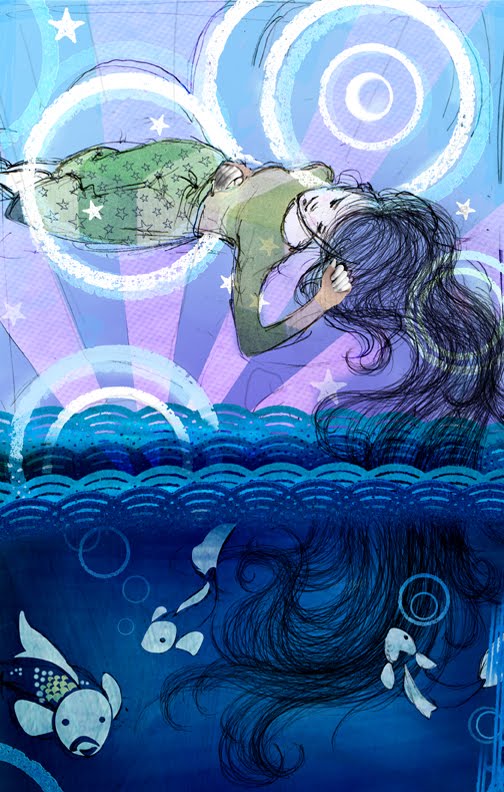 I was initially contacted by Terri for this. She said they liked the use of nature in my work, and told me how the book focused on nature and how to "receive it's calming cues" when preparing for sleep. Terri asked me to match the nature theme and create imagery with dream-like/ flowing effects.
Water is a particularly strong symbol in the book, often used as a metaphor to describe different levels of consciousness. 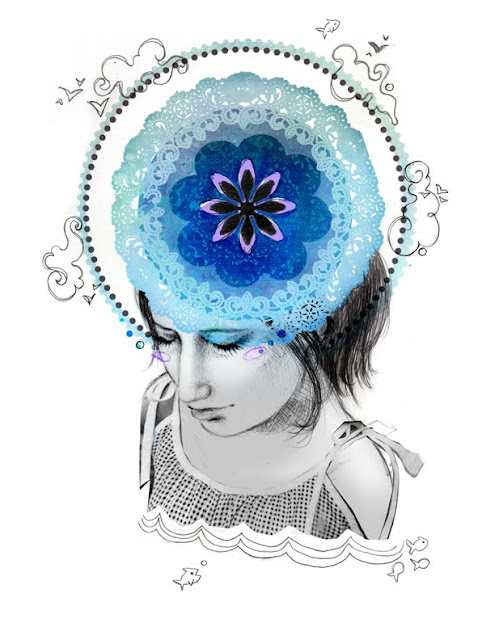 I also created a handful of spot illustrations, but I'm not posting them all here. So if you're inclined to see them, or if your java-toked hi-reved lifestyle is killing your ability to sleep easy, please take a look at this wonderfully helpful and beautifully written book! 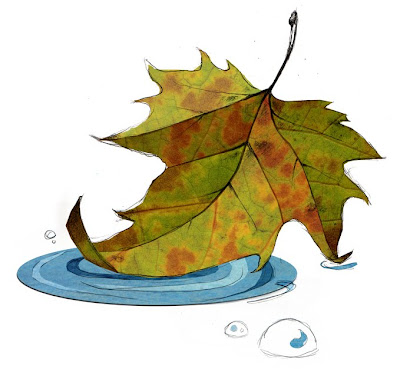 Posted by Unknown at 1:26 PM 0 comments Links to this post
Email ThisBlogThis!Share to TwitterShare to FacebookShare to Pinterest 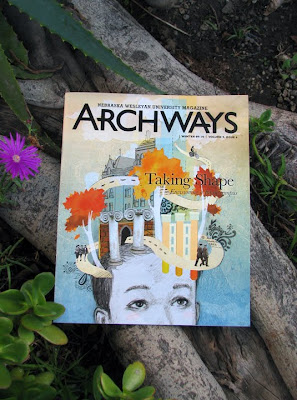 Archways Magazine - Winter 09-10, Volume 9, Issue 4
Here are 5 illustrations I made a few months back for an article in Archways Magazine called "Taking Shape." It's about the future plans and possibilities for Nebraska Wesleyan Universities' Campus. I worked with art director Melanie Falk, who was interested in having dream like imagery to represent the future structures on campus. You can view the other images and read the article online here. (I really think the images look better at this link then in the pictures below, but I wanted to share the layout out of the article here cause I like it!) 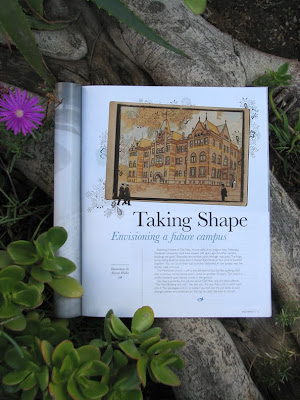 This one features the building "Old Main" that has been at the heart of campus for 120 years. 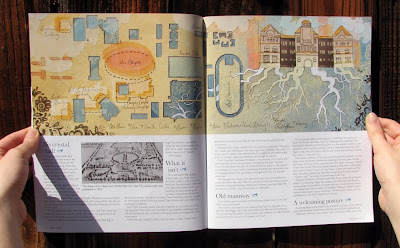 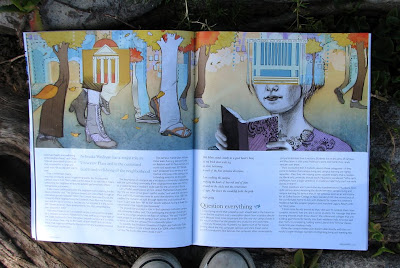 The above represents the goal of NWU to have an open and simbiotic relationship between its campus and the surrounding community. 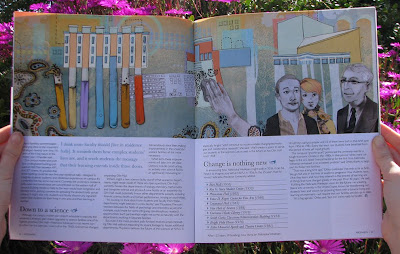 One of the biggest plans is constructing an entirely new science facility or significantly renovating or expanding on their main science building "Olin Hall."
Here's how the cover initially started: 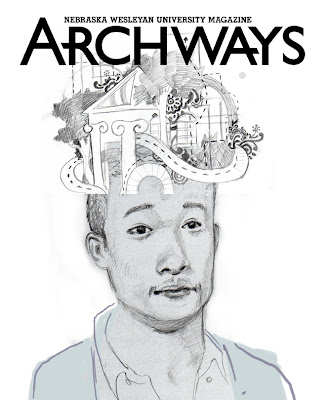 and where it ended: 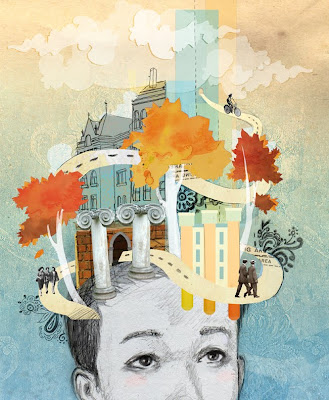 I had a lot of fun with this one. It was quite a challenge to get the 5 to work as a set. I tried using a sort of "split screen" approach for the majority, but also picking a color scheme and using it along with similar textures through-out helped a ton. If anyone has suggestions as to how to make these types of sets work together, I'd love to hear it!
Posted by Unknown at 10:51 PM 0 comments Links to this post
Email ThisBlogThis!Share to TwitterShare to FacebookShare to Pinterest 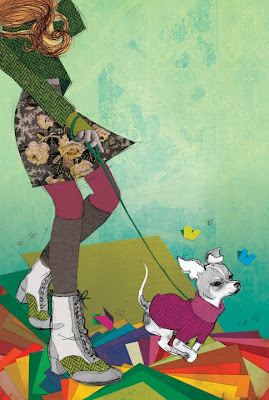 Here's a fun little something you can find while flipping through the LA weekly this week: a calendar! Look for a brilliant blue insert with a picture of a Chihuahua in a bee costume being attacked by a shark while riding the waves on konica minolta 1050. Unfold that sucker and you'll find... another chihuahua in costume. yay! This time being walked by some sexy legs.
looks great on fridges: 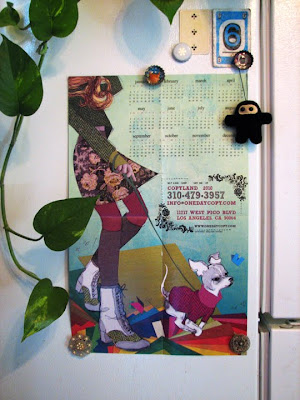 dont miss out, get yours today! offer ends February 18th 2010.
Posted by Unknown at 9:34 PM 1 comments Links to this post
Email ThisBlogThis!Share to TwitterShare to FacebookShare to Pinterest 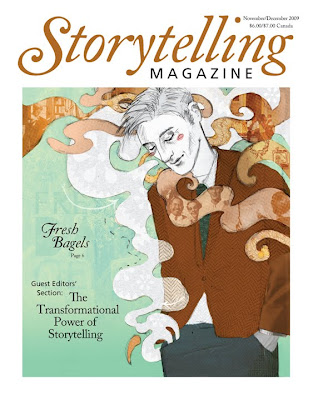 Storytelling Magazine - December 2009
I'm posting this a little late, but above is an illustration I worked on for the cover of Storytelling Magazine. I worked with Art Director Dale Atkinson on this, who gave me a lot a freedom and encouraged me to get abstract with my interpretation of the story supplied: "Fresh Bagels." This is a traditional Jewish folk tale retold by storyteller and teacher, Zane Chait, who holds storytelling workshops in the Chicago area. 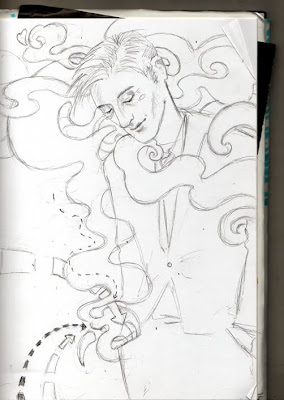 I particularly like how the "tentacle-like smells" (as Dale named them) mimic the Storytelling logo. Wish I could say I had this in mind the entire time, but that would be a blatant lie. so I'll be real with you- it was just one of those happy accidents! Thank you Dale, and Storytelling Magazine!
Posted by Unknown at 10:35 PM 1 comments Links to this post
Email ThisBlogThis!Share to TwitterShare to FacebookShare to Pinterest